So I’ve had a few days off recently and have been getting out and around, ‘settling in’ so to speak. I actually had three days off and took the R-Pod Camper up to Craig Montana for some floating and wade fishing.

Craig is a small true-blue fish-bum town on the banks of the Missouri River, hosting a grand total of one really awesome restaurant, three fly shops, and a true Montana style bar. With plenty of camping really close by on the banks of the Missouri this is a true fish bum paradise. Needless to say, I was stoked to get out of town and have the camper at my disposal. I brought along my Water Skeeter pontoon boat on the top of my car so I could do some floating and it really came in handy, super nice to have when you need to cover a good bit of ground during the day. Or so I thought. I pulled in Friday afternoon around 3 and got set up.

Had the camper ready to go and camp set up within an hour, right on the bank of the Missouri (with a nice area to take my ‘Skeeter out). For 7$ a night within walking distance of Izaak’s, Headhunters, and Joe’s you just can’t beat it. My first night I took it easy, just planning my float the next day and hanging out. I got the Cowboy Burger at Izaak’s and it was absolutely top notch. Fell right into a pretty serious meat coma directly afterward.

The next morning I woke up to 20mph winds. I walked over to Headhunters to get the scoop on the situation and have some coffee (spend money/kill time). I stocked up on the “hot” Missouri river flies and got a few spools of tippet, had some coffee and talked fishing with everybody that was hanging out on the porch. Great way to start off a morning of fishing!

I set out shortly after and drove up to the Wolf Creek bridge. After pumping up my pontoons and loading my gear I set out, or rather, set sail. The first thing I noticed was that I was being blown upriver against the current at a pretty decent rate. It was at that point I realized two things, it was going to be a very long float and very hard fishing. I fought it out all day trying as hard as I could against the wind, fished at least 15 different flies, but I got skunked

. I know I know. You know. Even considering the lack-luster fishing it was an awesome day. Absolutely beautiful, warm and sunny.

This all being said, there was some bug activity and hatches going down, but the wind wasn’t doing much for the surface feeding activity. More like blobs of bugs getting blasted around everywhere. Couple that with my fishing abilities on this river and you have a recipe for getting skunked.

I got back to my camp about 4:30 and cracked open a Keep Cool Creek (great Montana beer, even cooler can design) and cranked some Mitchell, getting set up for a fun night “on the town”. I ended up taking a stroll around the campground and met three super awesome people from Bozeman coming in from fishing and setting up camp; we ended up hitting it off and exchanging information. We all met up Izaaks and had an awesome meal and a few beers, including a little secret I didn’t know about, the smoked chicken wings. Holy crap, they were out of this world. Easily some of the best chicken wings I’ve ever had. I topped it off with some sort of burger that was equally as good as the night before then we strolled over to Joe’s for a few drinks. After ingesting our fair share of bourbon we walked back over to the campground and had a nice bonfire with some other local (and simi-local) fish bums. Mostly a night full of lies about nice fish we supposedly all hooked into during the day.

The next morning I got up pretty early, made some coffee and set out to redeem myself from the day before. I caught three nice fish pretty quick and then it seemed to drop off, I was pretty tired from the night before and had some stuff to get done back in Boze so I called it.

Also in the news, I headed out on Tuesday to take advantage of the great weather and do a bit of floating on the lower Gallatin but I arrived to find it pretty blown out and nasty, not much worth fishing. Had to find other activities to fill my day with. 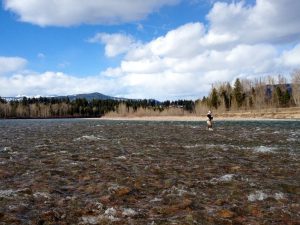